by Anupama Kundoo and Yashoda Joshi

More than a decade before Le Corbusier and Louis Kahn joined the Indian architectural scene, India’s first example of pre-independence Modern architecture, was being realized in a small pocket of French India, Pondicherry in 1938. Thirty years later, in 1968, the Mother envisioned a new city, Auroville, named after Sri Aurobindo, dedicated to achieving unity and international understanding. AVPNY talks in depth about the possibilities of exploring these two masterpieces.

Auroville was based on the vision of Sri Aurobindo and the Mother, who sought to create a new paradigm for humanity. Auroville was inaugurated 10 kilometers north of Pondicherry on a barren wasteland with the participation of 5,000 people from 125 countries and all Indian states, each of whom brought a handful of earth from their homeland to a marble clad lotus-bud shaped urn that still stands at the center of this planned city. French architect Roger Anger designed this city. The final plan housed four zones- in a radiating spiral movement around the city-center, and the Matrimandir, a central structure representing the soul of the city. Auroville is home to astounding creations like Town Hall Complex, by Anupama Kundoo Architects, and Auromodèle Houses by Roger Anger and André Hababou, to name a few. 150 kilometers south of Chennai, there is a Sri Aurobindo Ashram in Pondicherry, where he left complete responsibility of his ashram and disciples in the hands of The Mother. Pondicherry also has a stimulating cross-cultural history; hence, its built form lends to the town, a unique identity. One can witness a subtle blend of Tamil and French architecture in structures like, Golconde Dormitory by Antonin Raymond and George Nakashima (which is considered the first modernist building in India) and INTACH Pondicherry. While maintaining their individual identities, the two styles influence one another, evolving into a magnificent synthesis: Franco-Tamil architecture. 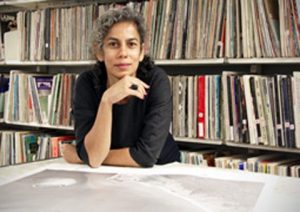 Anupama Kundoo was born in Pune, India in 1967. She graduated from Sir JJ College of Architecture, University of Mumbai in 1989, and received her PhD degree from the TU Berlin in 2008. In 2013 Kundoo received an honorable mention in the ArcVision International Prize for Women in Architecture for ‘her dedication when approaching the problem of affordability of construction and sustainability in all aspects’.

Anupama Kundoo’s internationally recognized and award-winning architecture practice started in 1990, demonstrates a strong focus on material research and experimentation towards an architecture that has low environmental impact and is appropriate to the socio-economic context. Kundoo has built extensively in India and has had the experience of working, researching and teaching in a variety of cultural contexts across the world.

Yashoda Joshi, holds B. Arch from University of Pune and has worked and trained with some of the best architects in India such as Balkrishna Doshi, Christopher Benninger over last eighteen years. She has also worked with Habitat et Territoire Conseil in Paris on Urban renewal and Community planning projects.

Auroville and Pondicherry are fascinating places for lovers of architecture. Whereas Pondicherry is characterized by a unique mixture of traditional Tamil and French colonial architecture, punctuated by more recent modern examples, Auroville is a whole new international city in the making, whose buildings are being designed by its residents, who come from more than 50 different nations of the world.

The guide in hand is a great companion for quick reference. Size, page layout and graphic design, maps and plans, and the subdivision into walkable thematic itineraries (unavoidably limiting the buildings to the ones sited along these routes) are all very helpful, also shedding light on the historical development of both places.